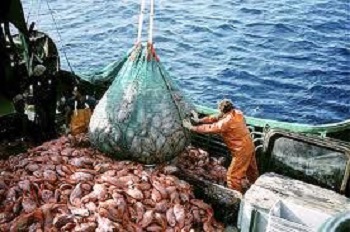 Clear evidence shows a southward shift in the position and intensification in the strength of the Angola/Benguela Front since 1980, related to a southward shift in the position of the South Atlantic subtropical anticyclone. Periodic, southward intrusions of warm, saline, nutrient-poor and low oxygen water onto the Namibian shelf and associated with marked southward movement of the Angola/Benguela Front, known as Benguela Niños, have occurred roughly once a decade, most notably in 1994/95 when the intrusion was particularly extensive and protracted, and most recently in 2010/11. The spawning success of pilchard is very dependent on the optimum environmental conditions in the northern waters of Namibia, and any deviations from that can result in recruitment failure and this has been observed more frequently in the last decade.

In the past three decades, the sea surface temperature (SST) off the coast of northern Namibia has increased in all months of the year by between 0.2 °C and 0.5 °C per decade depending on the season, but south of about Walvis Bay there has been no general change in SST over this period.

Whilst wind patterns off Lüderitz (the centre of the strongest upwelling in the Benguela system) display interannual and decadal-scale variability there appears to have been a general decline in upwelling-favourable winds there between 1990 and 2005 (Hutchings et al., 2009). Lamont et al. (2018) reported a significant quadratic trend in total cumulative upwelling (TCU) for the northern Benguela that corroborated previous reports of a recent decline in upwelling in that region, with TCU between 2009 and 2014 less than half the long-term mean. There have been large seasonal and interannual variations in dissolved oxygen in Namibian shelf waters in the last few decades, but no clear trends are evident, either in the advection of low-oxygen water from the Angola dome area, or in the frequency of localized low-oxygen events caused by the decay of organic matter. There is also no unequivocal evidence of major long-term changes in phytoplankton production in Namibian waters, despite the apparent long-term decrease in upwelling-favourable winds and the increase in SST over the northern part of the system. In contrast, there is evidence of a major increase in copepod production and of significant changes in zooplankton community structure since the 1970s. Whereas this had been attributed to increased primary production combined with a reduction in predation following the depletion of pelagic fish stocks, the change in community structure from large to small copepod species may also be associated with ocean warming observed in this region.

The dramatic declines in the abundance of pelagic fish in the 1970s caused by excessive fishing pressure appear to have changed the food web from one dominated by “wasp-waist” pelagic fish such as sardine and anchovy, to a less efficient regime in which jellyfish, and pelagic gobies have assumed far greater importance in the ecosystem, substantially altering trophic pathways.

The major changes in Namibia’s most important commercial resources in the 1970s and 1980s – i.e. hake, small pelagic fish (sardine and later anchovy) and rock lobster, were clearly primarily caused by overfishing rather than the environment (Boyer and Hampton, 2001; Roux et al., 2013). Since then, the environment has played a far larger role, particularly the major Benguela Niño event in 1994/95, which inter alia, severely reduced hake recruitment and probably also halted a modest recovery in the sardine population. Although less conclusive, there is evidence to suggest that the further substantial decline in the rock lobster resource which occurred in the late-1980s/early1990s was also environmentally induced, in this case by intrusions of low-oxygen water into the fishing grounds (Gammelsrod et al., 1998). The situation at present is that hake have expanded their distribution over a wider depth range, the very reduced sardine population (which is substantially different in structure than prior to the collapse) is now confined largely to areas north of Walvis Bay, while anchovy have all but disappeared from Namibian waters (Boyer and Hampton, 2001). Rock lobster catches appear to have more or less stabilized at a very low level since 1990. The distribution of Cape horse mackerel has shifted southwards, accompanied by changes in overall stock structure and a return to the areas where spawning occurred in the 1970s. Since catches of all these species have been conservatively managed since Namibian independence in 1990, whatever changes in abundance and distribution have occurred since then have most likely been environmentally driven, although changes in population size itself could also have played a role in some instances (Boyer and Hampton, 2001). It is clear that despite the increases in understanding of the effects of the environment on the Namibian marine ecosystem in recent years, changes in abundance and distribution arising from environmental changes cannot be predicted with sufficient confidence for use in management for any of the above resources. A possible exception is the greater appreciation of the origin and significance to marine life of Benguela Niño events, which may now be predictable to some extent a few months in advance, and be taken into account in management, at least qualitatively. Additionally, continued poleward movement of the Angola/Benguela Front as reported by Vizy, Cook and Sun (2018) may result in a contraction of the suitable habitat of commercially important species in northern Namibia.

It needs to be recognised that the complexity and high natural variability of marine ecosystems on all scales, aggravated by major declines in some marine resources from over-exploitation, make it very difficult to detect climate change signals against a high noise background. However, there is evidence of increased sea surface temperature in all regions; increased sea level in most regions; a remotely-driven southward (poleward) shift in the position of the Angola/Benguela Front and a recent decrease off Namibia in upwelling-favourable winds.

The fisheries rated as most vulnerable to climate change in Namibia were identified as the pilchard and rock lobster fishery.