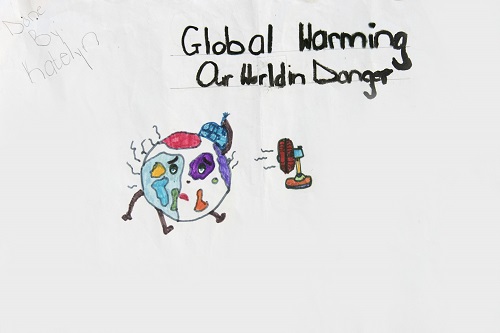 Katelyn De Freitas, from Helen van Rhijn Primary School in Lüderitz, won the competition in Namibia. She submitted a poster that depicts the danger the world is in due to climate change. If actions are not taken to combat climate change and its impacts, future generations will be the most affected. Katelyn’s poster reaffirms the American Indian proverb that states “We do not inherit the Earth from our ancestors; we borrow it from our children”.

“The poster is bold, colourful and creatively designed, using collage to catch the eye and show the themes of the marine system, mainly fishing,” read the judges’ remarks. The poster depicted a number of themes, such as dying fish, and included a powerful headline. As such it was clear and easy to understand.

According to the judges, Katelyn De Freitas illustrated a strong image with creativity. Effort was put into the art and the poster described the impacts climate change is having on the marine system with interesting icons.

Two other students presented excellent posters and were also recognised. Winners received stationery as an incentive and in recognition of their efforts.