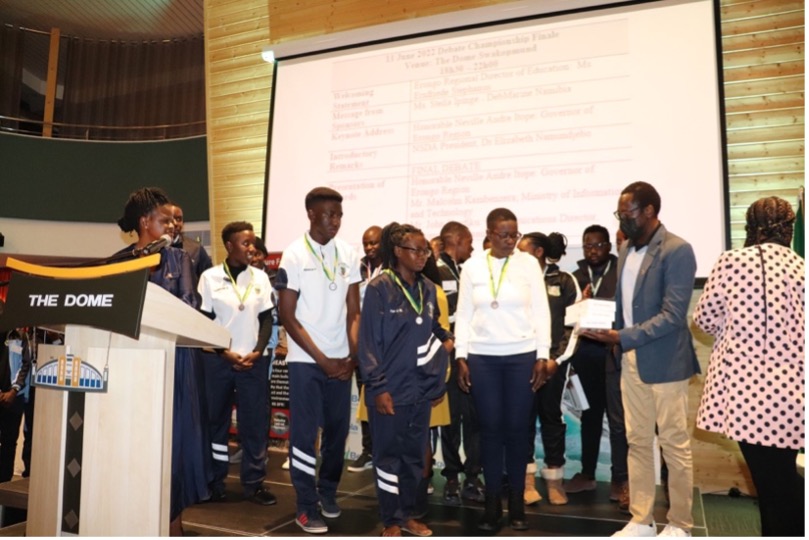 The Benguela Current Convention (BCC) together with the Namibia Nature Foundation (NNF), and the Namibia School Debate Association (NSDA) organized a national school debate championships in celebration of the 2022 World Ocean Day at The Dome in Swakopmund, Namibia.  The debate challenge saw learners from all regions in Namibia debate on relevant topics about Namibia’s maritime resources and associated industries.

The General Assembly of the United Nations passed resolution 63/111 on 5th December 2008, officially recognizing 8th June as World Ocean Day. Namibia being a signatory to the United Nations, does recognize the significance of this day and therefore joins the global community in celebration of World Ocean Day.  The theme for 2022 is “Revitliastion: Collective Action for the Ocean” which focuses on the oceans role in sustaining life and livelihoods. Additionally, the role of Namibia’s President, His Excellency, Dr Hage Geingob, as one of the 14 global leaders serving on the High-Level Panel for a Sustainable Ocean Economy, emphasizes the importance that Namibia attaches to maintaining and adapting her marine economies into the future, to meet pressing and demanding challenges.

World Ocean Day provides an opportunity for all citizens to reflect on the benefits that are derived from the ocean. The celebration seeks to remind and encourage the community to take actions that contribute towards a healthy ocean through conservation and protection. It further reminds everyone that reducing pollution in all our waterways is a year-round commitment for which all humanity should take full responsibility. Lastly, it is an opportunity to promote public dialogue and knowledge on marine sciences and maritime affairs amongst school learners, youth, and the public.

This day further highlights international collective efforts that promote ocean and environmental conservation worldwide.  World Ocean Day raises awareness about the impact of human activities on oceans and to create a united movement for the species of the ocean. The learners that participated in the debate challenge were competitive and each had a keen eye fixed on the prize at stake. It was Omusati Region that walked away with the first prize, followed by Oshikoto Region in second place with Okavango West Region taking third place. All winning teams (learners and teachers) were awarded with a trophy and medal as well as a Samsung Galaxy Tab 7. A special category was also awarded to the best debaters, a male learner from Otjozondjupa Region and female learner from Oshikoto Region.This collaborative debate initiative was supported by DebMarine, Namibia Fish Consumption Promotion Trust, Namport, Cadillu Fishing, Namsov, Namibia Marine Resources (NMR), Seawork Fish Processors, Omankete, Mbashe Fishing, Pereira Seafoods, The Princess Brand Processing and ExxonMobil. A breakdown of the expenditure is displayed below.

A snapshop of the final debate proceedings